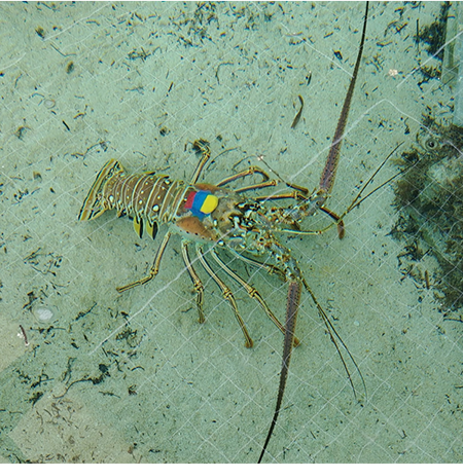 Research has been carried out investigating how artificial light at night impacts the ecosystem and its inhabitants, but the effects on aquatic invertebrates specifically are poorly understood. Light pollution is a fast-increasing threat to terrestrial and aquatic biodiversity and has, for example, been proven to disrupt diel cycle.

To better understand the effects of unnatural light at night on aquatic invertebrates, scientists at Carleton University and University of California Santa Barbara attached biologgers to adult Caribbean spiny lobsters (Panulirus argus). The lobster is an ecologically, culturally, and economically important species in the western Atlantic Ocean.

Biologgers used to measure behavioural responses
36 lobsters were collected from the reefs outside of the Bahamas, and were kept in large, outdoor tanks for 3-14 days before experimentation. Star-Oddi’s leadless heart rate and temperature loggers, DST micro-HRT, were affixed above the heart of the lobsters. A tri-axial accelerometer was also attached on each lobster.

The heart rate loggers were set to record heart rate over a 5 second period (125Hz) every ten minutes and saved ECG data once an hour for validation purposes. Accelerometers were set at 25Hz and were used to measure activity in total darkness.

Four trials over four days and nights
The simulated reef mesocosm, where the trials were conducted, had incandescent lightning at 1 lux to simulate light levels offshore of urban areas. A total of four trials, each lasting four days and four nights, were performed with 8-10 lobsters in each trial. The fourth night was unnaturally lit to compare it to the third night which was naturally dark.

The authors of the paper propose that this species may have some resilience to low levels of artificial light, but nevertheless recommend further research on human caused disturbance.

The paper was published in Conservation Physiology journal and can be accessed here.

Photo: Copyright: the Author(s) 2020.
Published by Oxford University Press and the Society for Experimental Biology